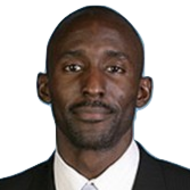 Lloyd Daniel Pierce (born May 11, 1976) is an American basketball coach who serves as the lead assistant coach for the Indiana Pacers of the National Basketball Association (NBA). He has previously coached for the Philadelphia 76ers, Memphis Grizzlies, Cleveland Cavaliers, Golden State Warriors, and Atlanta Hawks. In addition to coaching, he has also played internationally.

Coaching career
Cleveland Cavaliers
Pierce served as the coordinator for player development for the Cavs from 2007 to 2010.

Memphis Grizzlies
Pierce began coaching the Grizzlies in 2011 and worked under head coach Lionel Hollins. He was also part of the player development staff.

Philadelphia 76ers
Pierce joined the 76ers just before the 2013–14 season. He would be involved with The Process throughout the next few seasons.

Indiana Pacers
Following his departure from Atlanta, Pierce was hired as the lead assistant coach for the Indiana Pacers.