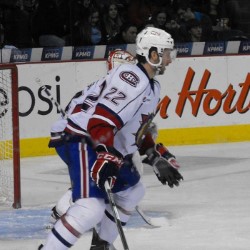 Playing career
Schiestel was originally selected by the Buffalo Sabres in the 2nd round (59th overall) of the 2007 NHL Entry Draft and played within the Sabres organization predominantly with AHL affiliates, the Portland Pirates and the Rochester Americans. On July 29, 2013, Schiestel signed as a free agent to a one-year AHL contract to return to his native Hamilton with the Bulldogs.

On August 30, 2014, Schiestel left North America as a free agent and signed his first contract abroad in Germany on a one-year contract with Düsseldorfer EG of the Deutsche Eishockey Liga. Schiestel continued his European career after one season in Germany, signing with Danish club Rungsted IK of the Metal Ligaen on August 21, 2015.

After two seasons in Europe, Schiestel opted to return to North America for the 2016–17 season, agreeing to terms on a one-year deal with the Indy Fuel of the ECHL on October 6, 2016. In the 2016-17 season with the Fuel, Schiestel appeared in just 14 games with 5 assists before opting to return abroad, signing a one-year deal with Hungary's Fehérvár AV19 of the Austrian Hockey League.