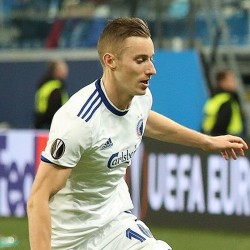 Ján Greguš (born 29 January 1991) is a Slovak professional footballer who plays as a midfielder for MLS team Minnesota United and the Slovakia national football team.

Club career
Greguš began playing football at the hometown club Nitra. On 20 May 2009, he made his senior debut in Corgoň Liga against Spartak Trnava at the age of 18.

After four games for Nitra, Greguš signed for Baník Ostrava in July 2009. He scored his first goal in a 1–0 away win against Hradec Králové on 8 April 2012.

Greguš moved to Jablonec mid-season during the 2014–15 campaign. He went on to make 36 appearances scoring 6 goals before leaving the club.

On 19 June 2016, the Danish club Copenhagen announced the signing of Greguš on a four-year contract.

On 20 December 2018, Minnesota United announced the signing of Greguš as their third designated player.

International career
Greguš debuted in Slovakia senior team on 31 March 2015 against Czech Republic. In the 49th minute of the game he assisted Ondrej Duda for the winning goal of the match. By the end of the year, he was also fielded for matches against Spain, Switzerland and Iceland.

Two years later, in his 12th cap for the national team, Greguš scored his first goal in the senior squad. This was in the 42nd minute of a qualifying match for a 2018 FIFA World Cup against Malta in Ta'Qali, when Greguš's right-foot shot slipped under Andrew Hogg. At that time, the score was tied 1–1, after an early goal by Vladimír Weiss (2nd minute), followed by 14th-minute equalizer by Jean Paul Farrugia. Slovakia went on to win the game 3–1 and moved to the second position of the Group F table, after 5 of the 10 matches played. After the match, Greguš said that this goal was "so far, the most important" goal in his career.

In 2018, he was fielded for the 90 minutes of the final match of the 2018 King's Cup against Thailand (3–2 victory), winning his first trophy with Slovakia, after being benched in the semi-finals against UAE. Later in the year, he scored his second international goal in a friendly fixture against Morocco, as a part of their preparation for 2018 FIFA World Cup. He scored with a right-foot shot from the outside of the penalty box, after calling the ball ahead Albert Rusnák, who got the assist. Greguš only played the second half of the game, replacing the captain Marek Hamšík. Slovakia lost the game 1–2.