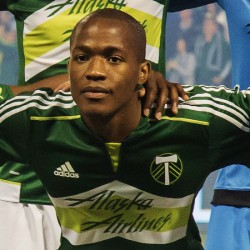 Darlington Joephillip Nagbe (born July 19, 1990) is an American professional soccer player who plays as a midfielder for Columbus Crew in Major League Soccer and the United States national team. Nagbe spent the first seven seasons of his career with the Portland Timbers, winning the MLS Cup with the club in 2015, before being acquired by Atlanta United following the 2017 season.

Early years
Nagbe was born in Liberia and left the country as a five-month-old when his mother fled due to the First Liberian Civil War, taking him and his brother with her. They joined her husband Joe Nagbe, a professional soccer player, and his career took the family to France, Greece, and Switzerland before they eventually settled in the Cleveland area in 2001 when Darlington was 11 years old.

Nagbe grew up in Lakewood, Ohio, where he attended Lakewood High School and then St. Edward High School, scoring 18 goals and adding 10 assists as a senior. He was a member of the Region II ODP team, was a 2007 adidas ESP All-Star and was member of the Ohio North ODP team, as well as winning four Ohio North state club titles with the Cleveland Internationals. Nagbe also participated in the U.S. Soccer Development Academy with the Internationals.

College and amateur career
Nagbe played college soccer at the University of Akron, scoring 19 goals and contributing 19 assists in 73 matches during three collegiate seasons. He was a Soccer America All-Freshman first-team honoree, and was named All-MAC Newcomer of the Year as a freshman in 2008. As a sophomore in 2009, Nagbe was named to the NSCAA All-America Second Team, Soccer America MVP Second Team, Top Drawer Soccer Team of the Season Second Team, All-Great Lakes Region First Team, and All-Mid-American Conference First Team. In 2010, Nagbe helped the Akron Zips to their first national championship, a 1–0 win against Louisville; he was subsequently named to the NSCAA All-America First Team, the All-MAC First Team, the College Cup All-Tournament Team, and was honored with the MAC Hermann Trophy as the 2010 College Soccer Player of the Year.