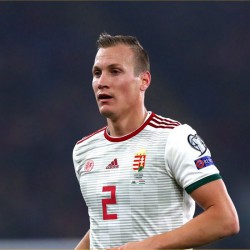 Ádám Lang (born 17 January 1993) is a Hungarian professional footballer who plays as a central defender for Omonia and Hungary national team.

He scored his first Hungarian League goal in the 2013–14 Nemzeti Bajnokság I season against Mezőkövesd-Zsóry SE in the 28th minute at ETO Park.

On 21 August 2016, he scored his first goal in the 2016–17 Nemzeti Bajnokság I in a 5–1 victory for Videoton over Debreceni VSC. Lang scored in the 23rd minute and he was able to repeat his feat with another goal in the same match in the 56th minute.

Dijon
Lang signed to Dijon FCO in September 2016; his signing was registered minutes before the transfer window deadline.

On 20 September 2016, he played his first match in the Ligue 1 at the Parc des Princes, Paris, France against Paris Saint-Germain F.C. in the 2016–17 Ligue 1 season. In the 15th minute he scored an own goal and the match ended with a 3–0 defeat for Dijon.

International career
On 22 May 2014, Lang played his first match for the Hungary national team against Denmark in a 2–2 draw friendly match at the Nagyerdei Stadion, Debrecen.

On 1 June 2021, Lang was included in the final 26-man squad to represent Hungary at the rescheduled UEFA Euro 2020 tournament.