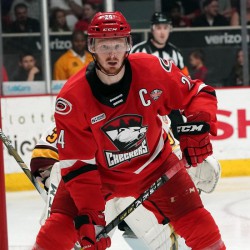 Playing career
As a youth, Brown played in the 2005 Quebec International Pee-Wee Hockey Tournament with the Detroit Little Caesars minor ice hockey team. He later played with the Boston College Eagles men's ice hockey team of the NCAA Hockey East Conference, from 2010 to 2014, and was captain during his senior season.

On April 12, 2014, Brown was signed as an undrafted free agent to a two-year entry-level contract with the Carolina Hurricanes. Brown was recalled to make the Hurricanes opening night roster in his first professional season in 2014–15. He made his NHL debut with the Hurricanes in a defeat to the New York Islanders on October 10, 2014. He recorded his first career NHL goal and assist on March 31, 2016, against the New York Rangers. He spent to majority of his tenure in the Hurricanes' organization with their American Hockey League (AHL) affiliate, the Charlotte Checkers, where he was team captain from 2016 to 2019 and won a Calder Cup in 2019.

Brown was placed on waivers by the Golden Knights on October 10, 2021 and claimed by the Philadelphia Flyers the next day.

Personal life
Both Brown's father Doug and uncle Greg had NHL careers. His father played for the New Jersey Devils, Detroit Red Wings, and Pittsburgh Penguins, and his uncle played for the Buffalo Sabres, Pittsburgh Penguins, and Winnipeg Jets. Greg was also an associate head coach for Patrick while he played at Boston College. All three are Boston College alumni. Brown's younger brother Christopher also played at Boston College, and was captain during his junior and senior seasons. While Christopher was drafted by the Buffalo Sabres, he has not appeared in the NHL; he currently dresses for the Jacksonville Icemen in the ECHL.

Brown's maternal grandfather is Wellington Mara, longtime owner and president of the NFL's New York Giants. He is also cousins with actresses Kate and Rooney Mara.