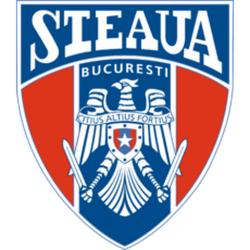 Nicknames
Roș-albaștrii (The Red and Blues)

In 2017, the parent club reactivated its football section and entered it into the 2017–18 season of Liga IV, the fourth tier of the Romanian Championship.

According to the club's records and the latest Romanian court order (July 2019), it is the most successful football club in Romania, with national records for winning the domestic trophies, plus the European Cup in 1986 and European Super Cup in 1987. However, ownership of the titles is disputed between two entities, with agencies such as UEFA and LPF attributing all of the original club history to the other club, FCSB.

They play their home matches at Ghencea V, one of the former training fields of the Complexul Sportiv Steaua, as the previous stadium, used by the historic Steaua entity during its heyday, was demolished in order for a new replacement to serve as a training pitch for Euro 2020. The team colours are red and blue.

The club has a long-standing rivalry with neighbouring Dinamo București, with matches between the two being commonly referred to as ""the Eternal Derby"", ""the Romanian Derby"" or ""the Great Derby""."

"The Steaua Stadium (Romanian: Stadionul Steaua), informally also known as Ghencea, is a multi-purpose stadium in Bucharest, Romania. It primarily serves as the new home stadium of Steaua București, replacing the former home, Stadionul Steaua. The new stadium costed €95 million and is located in the neighborhood of Ghencea. It seats 31,254 spectators. The stadium was inaugurated on 7 July 2021, with a match between Steaua and OFK Beograd.

North Macedonia's squad was based at the Stadionul Steaua during preparation for and between matches at UEFA Euro 2020."