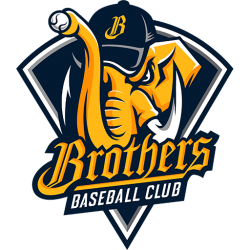 The CTBC Brothers (Chinese: 中信兄弟) or simply Brothers are a professional baseball team in Taiwan. The team was originally established as an amateur team in 1984 by the Brother Hotel located in Taipei City, and later joined the Chinese Professional Baseball League (CPBL) in 1989. Brother Hotel's chairman Hung Teng-sheng (洪騰勝) also acted as CPBL's secretary-general from 1987 to 1991. The Brothers are currently owned by Hua Yi, a subdivision of CTBC Holding.

With its long history from the amateur era plus a successful marketing strategy and management, the team has long been one of the most popular Taiwanese baseball teams, winning the CPBL championship on seven occasions.

The team has always worn yellow uniforms. Its current home is in Taichung, with the home field at the Taichung Intercontinental Baseball Stadium.

Taichung Intercontinental Baseball Stadium (Chinese: 臺中市洲際棒球場) is a stadium in Beitun District, Taichung, Taiwan. The stadium officially opened on November 9, 2006, replacing the antiquated Taichung Baseball Field. Located on the corner of Chongde Road (崇德路) and Huanzhong Road (環中路), it has considerably more parking available than the old stadium, which will be much more convenient for fans.

The stadium is a venue for rock concerts and also hosted Zhang Yimou's Turandot at the Bird's Nest in 2010.