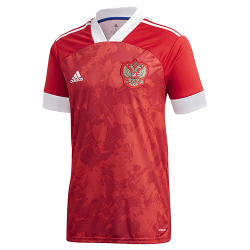 Although a member of FIFA since 1912 (as the Soviet Union before 1990), Russia first entered the FIFA World Cup in 1958. They qualified for the tournament 11 times in total, with their best result being their fourth-place finish in 1966. Russia has been a member of UEFA since 1954. They won the first edition of the European Championship in 1960 and were runners-up in 1964, 1972 and 1988. Since the dissolution of the Soviet Union, Russia's best result was in 2008, when the team won bronze medals.

Luzhniki Stadium (Russian: стадион «Лужники», IPA: ) is the national stadium of Russia, located in its capital city, Moscow. The full name of the stadium is Grand Sports Arena of the Luzhniki Olympic Complex. Its total seating capacity of 81,000 makes it the largest football stadium in Russia and the ninth-largest stadium in Europe. The stadium is a part of the Luzhniki Olympic Complex, and is located in Khamovniki District of the Central Administrative Okrug of Moscow city. The name Luzhniki derives from the flood meadows in the bend of Moskva River where the stadium was built, translating roughly as "The Meadows".

Luzhniki was the main stadium of the 1980 Olympic Games, hosting the opening and closing ceremonies, as well as some of the competitions, including the final of the football tournament. A UEFA Category 4 stadium, Luzhniki hosted the UEFA Cup final in 1999 and UEFA Champions League final in 2008. The stadium also hosted such events as Summer Universiade, Goodwill Games and World Athletics Championships. It was the main stadium of 2018 FIFA World Cup and hosted 7 matches of the tournament, including the opening match and the final.

In the past its field has been used as the home ground (at various times) for football games played by CSKA Moscow, Spartak Moscow and Torpedo Moscow, however, there are currently no clubs based at the stadium. Today it is mainly used as one of the home stadiums of the Russia national football team. The stadium is used from time to time for various other sporting events and for concerts. It is also used to host Russian domestic cup finals.