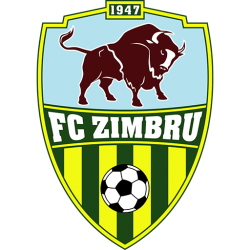 Fotbal Club Zimbru is a professional football club based in Chișinău, Moldova, that competes in the Divizia Națională, the highest tier of Moldovan football.

Founded in the Moldavian Soviet Socialist Republic in 1947, Zimbru entered the Soviet Top League in 1956 and participated in 11 seasons before their last relegation in 1983. After the independence of Moldova in 1991, the team established itself as an early force in the country, winning all of the first five national championships and eight of the first nine, but have not won since. Zimbru have also won six Moldovan Cups and one Moldovan Super Cup.

The Zimbru Stadium is a football-specific stadium in Chișinău, Moldova completed in May, 2006 with a capacity of 10,400 people, corresponds to all norms required by UEFA and FIFA for national and international matches. It is currently used mostly for football matches and is the home stadium of Zimbru Chișinău and the Moldova national football team.

The Moldovan football team's second biggest defeat took place in this stadium, a 5-0 defeat to England in September 2012, during FIFA World Cup 2014 Qualification.