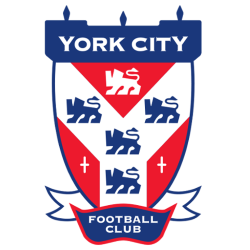 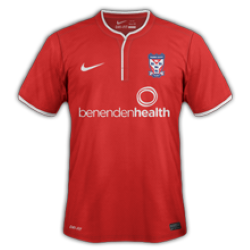 York City Football Club is a professional association football club based in the city of York, North Yorkshire, England. The team compete in the National League North, the sixth tier of league football in England, as of the 2017–18 season.

First founded in 1908, the club played seven seasons in non-League football before folding in 1917. A new club was formed in 1922, and played in the Midland League for seven years before joining the Football League. They played in the third tier until 1959, when they were promoted for the first time. York achieved their best run in the FA Cup in 1954–55, when they met Newcastle United in the semi-final. They fluctuated between the Third and Fourth Divisions, before spending two seasons in the Second Division in the 1970s. York first played at Wembley Stadium in 1993, when they won the Third Division play-off final. At the end of 2003–04, they lost their Football League status after being relegated from the Third Division. The 2011–12 FA Trophy was the first national knockout competition won by York, and they returned to the Football League that season.

York are nicknamed "the Minstermen", after York Minster, and the team traditionally play in red kits. They played at Fulfordgate from 1922 to 1932, when they moved to their current ground, Bootham Crescent. The ground has been subject to numerous improvements over the years, but the club lost ownership of it when it was transferred to a holding company in 1999. York bought it back five years later, but the terms of the loan used to do so necessitated they move to a new ground. They are due to move into the York Community Stadium in 2018. York have had rivalries with numerous clubs, but their traditional rivals are Hull City and Scarborough. The club's record appearance holder is Barry Jackson, who made 539 appearances, while their leading scorer is Norman Wilkinson, with 143 goals.

Bootham Crescent is a sports stadium in York, North Yorkshire, England, and is the home of association football club York City and rugby league club York City Knights. With a capacity of 8,256, the ground is located near the centre of the city, just over a mile from York railway station.

York City leased land at Bootham Crescent from York Cricket Club as a replacement for their ground at Fulfordgate, which was on the outskirts of the city. The ground was constructed in four months, and officially opened on 31 August 1932. During the Second World War, the Popular Stand was converted into an air-raid shelter, and the ground suffered slight damage when a bomb landed on houses along the Shipton Street End. York purchased Bootham Crescent for £4,075 in September 1948. Floodlights were fitted at the ground in 1959, and were replaced by ones twice as powerful in 1995. A number of improvements were made in the early 1980s, with a gymnasium, offices and a lounge for officials built.

The David Longhurst Stand opened in 1991 after a roof was erected on the Shipton Street End. It was named after the former York player David Longhurst, who died during a match at the ground in 1990. Bootham Crescent hosted football in the Football League from 1932 to 2004 and from 2012 to 2016, both spells ending after York were relegated into non-League football. The ground was renamed KitKat Crescent from 2005 to 2010 as part of a sponsorship deal with Nestlé. York are expected to move to a community stadium at Monks Cross in Huntington in early 2018, and the Bootham Crescent site will be used for housing.

Bootham Crescent comprises four stands: the Main Stand, the Popular Stand, the David Longhurst Stand and the Grosvenor Road End. The ground has held a league representative match, neutral club matches, and schoolboy and youth international matches. Other than football, it has hosted a concert, a grand firework display, American football and rugby league matches and beer festivals. The record attendance of 28,123 was set in March 1938, for an FA Cup match against Huddersfield Town. The highest seasonal average attendance of 10,412 was achieved in 1948–49.