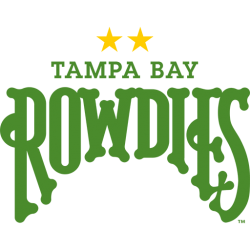 The Tampa Bay Rowdies are an American professional soccer team based in St. Petersburg, Florida. The club was founded in 2008 and first took the pitch in 2010. Since 2017, the Rowdies have been members of the USL Championship in the second tier of the American soccer pyramid. They formerly played in the North American Soccer League (NASL) (from 2011 to 2016) and USSF Division 2 (in 2010), which were also second-tier leagues. The Rowdies play their home games at Al Lang Stadium on St. Petersburg's downtown waterfront.

The current club shares its name, logo, and some of its club culture with the original Tampa Bay Rowdies, who were active from 1975 until 1993, most notably in the original North American Soccer League. The owners of the current club announced their intention to use the old Rowdies' trademarks at its introductory press conference in 2008. However, licensing issues forced the club to use the name FC Tampa Bay until December 2011, when it gained full rights to the Rowdies name and other intellectual property. The current Rowdies have always used the same green and yellow color scheme and "hoops" as the original team, even when they could not yet use the Rowdies name.

The Rowdies captured the NASL championship in Soccer Bowl 2012, and their team shield includes two stars: one for their 2012 win and one for the 1975 Soccer Bowl championship won by the original Rowdies. The club has had a long-standing rivalry with the Fort Lauderdale Strikers, with whom they have contested the Florida Derby since the original Rowdies and Strikers first met in 1977. Al Lang Stadium is a stadium in Downtown St. Petersburg, Florida, United States. Originally a baseball park, first built in 1947, reconstructed in 1976, and renovated in 1998, it was redesigned as a soccer venue in 2011. The facility is named in honor of Al Lang, a former mayor of St. Petersburg who was instrumental in bringing professional baseball to the city in the early twentieth century.

For many decades, the stadium was the spring training home for a series Major League Baseball clubs and the summer home of their affiliated minor league teams. Tenants included the New York Yankees, St. Louis Cardinals, New York Mets, Baltimore Orioles, and Tampa Bay Rays, amongst others. The stadium hosted its last spring training game in 2008. Since 2011, it has served as the home pitch for the Tampa Bay Rowdies soccer club of the North American Soccer League.