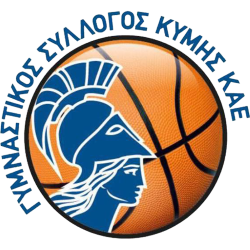 Kymi B.C. or Kymis B.C. is a Greek professional basketball club that is located in Kymi, on the island of Euboea, Greece. The club is also known as G.S. Kymis, with the club's full name being Gymnastikos Syllogos Kymis (Greek: Γυμναστικός Σύλλογος Κύμης). The club competes in the Greek Basket League. The team's emblem is the Greek Goddess Athena.
In 2019, the club merged with Lavrio, and granted its licence for the Greek Basket League to them. Kymis then temporarily suspended its basketball operations, and dropped out of all competitions for the time being.

Kymi was founded in 2010, with the creation of the men's basketball section. The club began its course very strongly, and managed to achieve several league promotions, from their local regional championships, all the way up to the top-tier level Greek national league.