The Atlanta Dream are a professional basketball team based in Atlanta, Georgia, playing in the Eastern Conference in the Women's National Basketball Association (WNBA). The team was founded before the 2008 WNBA season began. The team is owned by Dream Too LLC, which is composed of two Atlanta businesswomen: Mary Brock, and Kelly Loeffler. Like some other WNBA teams, the Dream is not affiliated with an NBA counterpart, even though the Dream share the market with the Atlanta Hawks.

The Dream has qualified for the WNBA Playoffs in seven of its nine years in Atlanta and has reached the WNBA Finals three times. The franchise has been home to many high-quality players such as University of Louisville standouts Angel McCoughtry and Shoni Schimmel, former Finals MVP Betty Lennox, and Brazilian sharpshooter Izi Castro Marques. In 2010, the Dream went to the WNBA Finals but fell short to Seattle. They lost to the Minnesota Lynx in the 2011 and 2013 WNBA Finals. State Farm Arena (formerly Philips Arena) is a multi-purpose indoor arena located in Atlanta, Georgia. The arena serves as the home venue for the National Basketball Association (NBA)'s Atlanta Hawks and the Women's National Basketball Association (WNBA)'s Atlanta Dream. It also served as home to the National Hockey League's Atlanta Thrashers from 1999 to 2011, before the team moved to Winnipeg. It opened in 1999 at a cost of $213.5 million, replacing the Omni Coliseum. It is owned by the Atlanta Fulton County Recreation Authority and operated by the Hawks, owned by Tony Ressler along with a group of investors including Grant Hill. 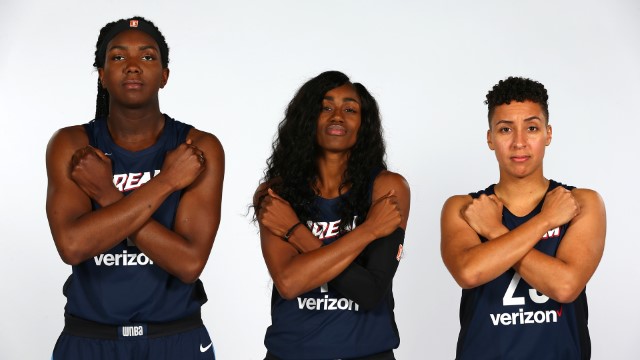