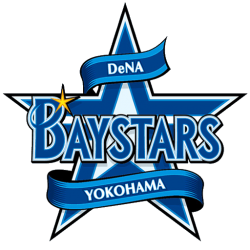 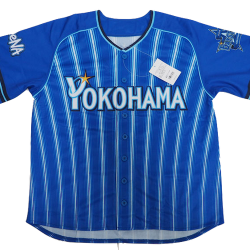 The Yokohama DeNA BayStars are a professional baseball team in the Japanese Central League. Their home field is Yokohama Stadium, located in central Yokohama. The team has been known by several names since becoming a professional team in 1950. It adopted its current name in 2011 when the club was purchased by software company DeNA.
The minor league team shares the same name and uniform as the parent team and plays in the Eastern League. The minor league home field is Yokosuka Stadium, located in Yokosuka, Kanagawa.
The team began as the Taiyo Fishing Company, an amateur team currently affiliated with the Maruha Corporation (presently Maruha Nichiro). The team began to appear in national tournaments in the 1930s and won the National Sports Festival in 1948, giving it national recognition. In the 1949 off-season, the Japanese professional baseball league drastically expanded itself and many players from the Taiyo amateur team were recruited to join the professional leagues. The owner of the Taiyo company decided to join the newly expanded Central League, which was established in 1950. Nissan Stadium, also known as International Stadium Yokohama, is a sports venue in Yokohama, Kanagawa Prefecture, Japan, which opened in March 1998. It is the home stadium of Yokohama F. Marinos of the J1 League.
International Stadium Yokohama has the highest seating capacity of any stadium in Japan, with a total of 75,000 seats. It hosted three first-round games during the 2002 FIFA World Cup, and the final game between Germany and Brazil was played there on 30 June 2002.
The stadium is one of the planned football venues for the 2020 Summer Olympics. The stadium has also been selected as one of the venues for 2019 Rugby World Cup and will also host the final of the tournament.