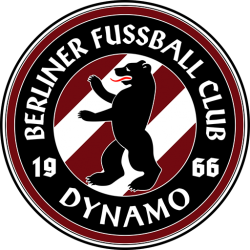 Berliner Fussball Club Dynamo e. V., commonly known as BFC Dynamo or BFC, is a German football club based in the Alt-HohenschĂ¶nhausen locality of Berlin. BFC Dynamo was formed in 1966 from the football department of SC Dynamo Berlin and was one of the key clubs of East German football. The club is the record champion of East Germany with ten consecutive league championships from 1979 through 1988. BFC Dynamo competes in the fourth tier Regionalliga Nordost.

The Friedrich-Ludwig-Jahn-Stadion at the Friedrich-Ludwig-Jahn-Sportpark is a sports stadium in the Prenzlauer Berg locality in Berlin. It is bordered on the south by Eberswalder StraĂźe, on the north by the Max Schmeling Halle, on the west by Mauerpark, where part of the Berlin Wall once stood. The complex includes a football and athletics stadium as well as several smaller sports fields. The stadium is the second largest in the city after Berlin's Olympiastadion in terms of seating capacity, with approximately 20,000 seats, of which 15,000 covered, and has temporarily been used by various Berlin football sides. BFC Dynamo is now the main user of the stadium, following its 2014 advance to the Regionalliga Nordost. Other tentants are VSG Altglienicke and Berlin Adler. Friedrich-Ludwig-Jahn-Sportpark was the venue for the 2018 World Para Athletics European Championships.