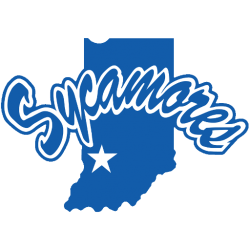 The Indiana State Sycamores basketball is the NCAA Division I men's basketball program of Indiana State University in Terre Haute, Indiana. They currently compete in the Missouri Valley Conference. The team last played in the NCAA Division I Men's Basketball Tournament in 2011.
The Sycamores' first season was 1896, making them the oldest basketball team in the NCAA along with Bucknell, Minnesota, and Washington; however, the records from 1896 to 1899 no longer exist. The Sycamores boast two College Players of the Year, 14 All-Americans, 39 1,000-point scorers, and 1,507 victories. Their victory count places them in the top 70 of all NCAA Division I programs.

The Hulman Center is a 10,200-seat multi-purpose arena on the campus of Indiana State University in Terre Haute, Indiana, USA. Initially named the Hulman Civic University Center, the facility opened on December 14, 1973. Funded by donations and bond issues after an initial $2.5 million challenge gift from philanthropist Tony Hulman, the patriarch of the local Hulman family, it is home to the Indiana State Sycamores basketball team.