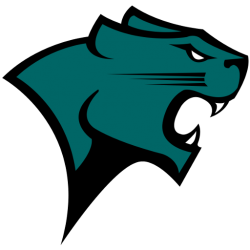 The Chicago State Cougars men's basketball team represents Chicago State University in Chicago, Illinois, United States. The team currently competes in the Western Athletic Conference and is coached by Lance Irvin, now in his second season. The Cougars play their home games at the Emil and Patricia Jones Convocation Center.
The 2012–13 Cougars won the Great West Conference Tournament championship to earn an automatic bid to the CollegeInsider.com Tournament.

The Emil and Patricia Jones Convocation Center, also known as the Jones Convocation Center or simply the JCC, is a 7,000-seat multi-purpose arena in Chicago, Illinois. Completed in 2007, the arena is home court for the Chicago State University Cougars men's and women's basketball teams. The arena replaced the Dickens Athletic Center, which only had capacity to seat 2,500 persons.
The convocation center is unique among Illinois university athletic projects, because Chicago State University did not have to raise any money for the project. The money was allocated from the State of Illinois treasury by then Senate President Emil Jones.
The venue hosted the 2012 and 2013 Great West Conference Men's Basketball Tournament.