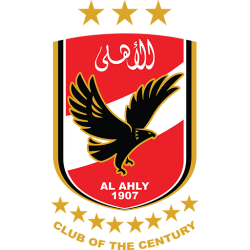 Al Ahly Sporting Club (Arabic: النادي الأهلي للرياضة البدنية‎), commonly referred to as Al Ahly, is an Egyptian sports club based in Cairo. It is known as "The Club of the Century" in African football. It is best known for its professional football team that plays in the Egyptian Premier League, the top tier in the Egyptian football league system, and is the most decorated football club in Africa. It was founded on 24 April 1907, as a gathering place for Cairo's Student Unions.

Al Ahly has a record of 41 national league titles, 36 national cups titles, and 11 national super cup titles making Al Ahly the most decorated club in Egypt. In addition, Al Ahly has never been relegated to the Egyptian Second Division.

Al Ahly Stadium (Arabic: ستاد الأهلى‎), commonly referred to with its old name Al Salam Stadium (Arabic: ستاد السلام‎), is a multi-use stadium used mostly for association football matches with an all-seated capacity of 30,000. The stadium is the home venue of Egyptian Premier League sides Al Ahly and El Entag El Harby. The stadium was built in 2009 and hosted Group B during the 2009 FIFA U-20 World Cup, and also hosted matches in the 2019 Africa Cup of Nations.