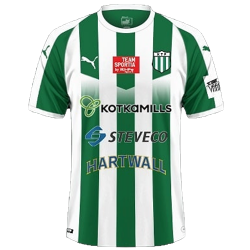 Kotkan Työväen Palloilijat (abbreviated as KTP) is a Finnish football club based in Kotka, Finland, and currently competing in Finland's second league, Ykkönen. The club was founded in 1927 and its colours are green and white. Immediately after its formation the club joined the Finnish Workers' Sports Federation, to which it still belongs. KTP play its home matches at Arto Tolsa Areena.

Arto Tolsa Areena is a football stadium in Kotka, Finland. It is the home stadium of Kotkan Työväen Palloilijat (KTP). The stadium holds 4,780 and was inaugurated in 1952 for the Helsinki Olympics. The stadium's record attendance was made during the Olympic Games in the football match between the Soviet Union and Bulgaria, the score having been 2–1 a.e.t.. Depending on the source, the record is 10,000, or 10,637 or 10,950.

Arto Tolsa Areena used to be known as "Urheilukeskus" ("Sports Center" in Finnish). It got its current name after it was renovated around the turn of millennium. The current name comes from Arto Tolsa, who was a legendary Finnish player of Kotkan Työväen Palloilijat, the predecessor of KTP.

At the beginning of the 2015 season, the pitch was converted to an artificial playing surface.