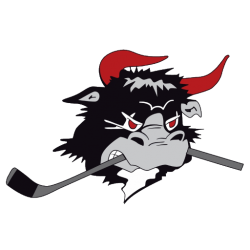 The Rødovre Mighty Bulls is a Danish professional ice hockey team based in Rødovre, Denmark, playing in the Metal Ligaen, the top tier of Danish ice hockey. The club was founded in 1961 and play their home games in the Rødovre Skøjte Arena which has a capacity of 3,600 spectators.

From 1977-1979, the team was coached by Boris Kulagin, the former coach of the Soviet national ice hockey team. Kulagin joined the Danish team after getting fired as head coach of the Soviet national team following a disappointing 3rd-place finish at the 1977 World Ice Hockey Championships. Rødovre had used contacts at the Soviet Embassy in Copenhagen, asking them to find a suitable coach for the team. Much to their surprise, they received the famous World Championship winning coach. The fact that such a high level coach was sent to coach in the then lowly Danish league was seen by many as an additional form of punishment for the poor result at the 1977 World Championships. Under Kulagin's guidance, the team won their first Danish title in 1978.

Rødovre Skøjte Arena (as a result of a name sponsorship also known as Rødovre Centrum Arena), is an ice hockey arena in Rødovre, Greater Copenhagen. The arena, inaugurated on 6 February 1995, is home to both the Rødovre Mighty Bulls and the parent club RSIK and is used for both figure skating and ice hockey.

The arena replaced the old Rødovre Ice Skating Hall (Rødovre Skøjtehal) with the nickname Kostalden (cow shed), which was in the northeastern part of Rødovre at Rødovrevej. Rødovre Skøjte Arena is located on Rødovre Parkvej and is built together with the sporting arena Rødovrehallen via an entrance foyer. From this foyer there is access to both the spectator seats and the basement where the changing rooms are located. On the western end, the arena is connected to a secondary practice rink. The Rødovre Ice Skating Arena was built after a Norwegian model, in particular the ice hockey arena that were built for the Olympic Winter Games in Lillehammer. This is reflected, among other things, in the roof construction, which slopes out towards Rødovre Parkvej, so that the seating area on the opposite side is higher and can accommodate more spectators. The arena has a total capacity of 3,600 spectators, with 2,012 seated and standing sections behind each goal, making it one of the larger ice hockey arenas in Denmark. The attendance record of 3,600 was set on 23 March 1998 in a game against the Frederikshavn White Hawks.

In 2009 a practice rink was built in connection with the main arena. The practice rink is built to North American size, making it smaller than the IIHF size used in Denmark. On top of the practice rink there is an indoor tennis court.

In 2020, an LED scoreboard was added over centre ice. Also in 2020, the boards will be replaced with a more flexible variety.