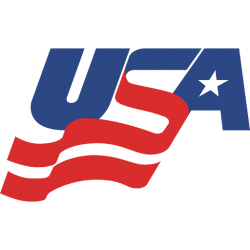 The United States men's national ice hockey team is based in Colorado Springs, Colorado, with its U18 and U17 development program in Plymouth, Michigan. The team is controlled by USA Hockey, the governing body for organized ice hockey in the United States. As of May 26, 2019, the U.S. team is currently ranked 6th in the IIHF World Rankings. The current head coach is Jeff Blashill.

The U.S. won gold medals at the 1960 and the 1980 Olympics and more recently, silver medals at the 2002 and 2010 Olympics. The U.S. also won the 1996 World Cup of Hockey, defeating Canada in the finals. The team's most recent medal at the World Championships came with a bronze in 2018. They won the tournament in 1933 and 1960. Unlike other nations, the U.S. doesn't typically use its best NHL players in the World Championships. Instead, it provides the younger players with an opportunity to gain international experience. Overall, the team has collected eleven Olympic medals (two of them gold), nineteen World Championship medals (two of them gold), and it reached the semi-final round of the Canada Cup/World Cup five times, twice advancing to the finals and winning gold once. The U.S. has never reached a World Championship gold medal game, having lost in the semifinal round nine times since the IIHF introduced a playoff system in 1992.

The U.S. is one of the most successful national ice hockey teams in the world and a member of the so-called "Big Six", the unofficial group of the six strongest men's ice hockey nations, along with Canada, the Czech Republic, Finland, Russia, and Sweden.