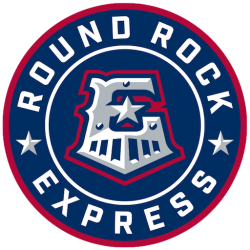 The Round Rock Express are a Minor League Baseball team of Triple-A West and the Triple-A affiliate of the Texas Rangers. They are located in Round Rock, Texas, and play their home games at the Dell Diamond. The team is named for Baseball Hall of Famer Nolan Ryan, who was nicknamed "The Ryan Express." Ryan, along with son Reid Ryan and Don Sanders make up the team's ownership group, Ryan Sanders Baseball.

The Express were established as a Double-A team of the Texas League (TL) in 2000. They won the Texas League championship in 2000. Round Rock was replaced by a Triple-A Pacific Coast League (PCL) team in 2005. The Triple-A Express carried on the history of the Double-A team that preceded them. With Major League Baseball's restructuring of Minor League Baseball in 2021, the Express were shifted to the Triple-A West.

Dell Diamond is the home stadium of the Round Rock Express, the Triple-A Minor League Baseball affiliate of the Texas Rangers major league baseball team. On April 16, 2000, the then-Double-A affiliate Express played their first home game at the stadium.

Dell Diamond is built on 85 acres (344,000 m2) of former farmland on the east side of Round Rock, Texas, a rapidly growing suburban city northeast of Austin. Nolan Ryan and his son Reid Ryan, part owners of the Express, originally wanted a stadium inside the city of Austin, but found a more attractive site in the City of Round Rock, with support from the city leadership. The city of Round Rock contributed $7.35 million to the $25 million cost of the facility. The city owns the ballpark and gave the Express a 38-year lease. Local-based computer technology company Dell contracted for naming rights in a deal that will cost the company $2.5 million over 15 years.