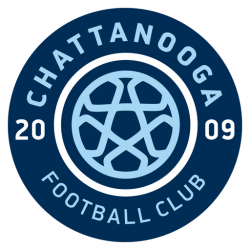 Chattanooga Football Club is an American professional soccer team based in Chattanooga, Tennessee, United States. Founded in 2009, the team began play in the National Independent Soccer Association (NISA) in Spring 2020. Prior to joining the NISA, the club played in the Southeast Division of the National Premier Soccer League (NPSL), a national amateur league at the fourth tier of the American Soccer Pyramid.

In early 2019, the club made history by becoming the first to offer ownership shares to the public and its fans under the crowdfunding rules of JOBS Act. In its attempt to raise $1 million, the team has currently raised more than $870,000 and has owners from all over the world.

The team plays its home games at Finley Stadium, where they have played since 2009. The team's colors are navy blue and white. In January 2017, reflecting the growing awareness and influence of Chattanooga FC, German-based VfL Wolfsburg signed a letter of intent to partner with Chattanooga FC, which includes women's football, youth development, and local social responsibility. The two teams mentioned the future possibility of international friendlies.

W. Max Finley Stadium is the home stadium for the University of Tennessee at Chattanooga football team and Chattanooga FC (NISA), a professional Division 3 soccer team. The stadium also hosts various high school sports and musical concerts. It is located in Chattanooga, Tennessee, United States. The stadium, which opened in 1997, has a current capacity of 20,412, and hosted the NCAA Division I National Championship Game from its opening season through 2009, after which the game moved to Pizza Hut Park in the Dallas suburb of Frisco, Texas.

The stadium is named in honor of W. Max Finley, former chairman of the Rock Tenn Corporation, who was an alumnus and active supporter of the University of Tennessee system. The playing field is named in honor of Gordon Lee Davenport, the president and CEO of the Krystal Company from 1975 to 1985 who served as Chairman of the Stadium Corporation and Campaign and worked endlessly and tirelessly in the planning and actual development of the facility. Bronze busts of both Finley and Davenport adorn the main entryway to the stadium.