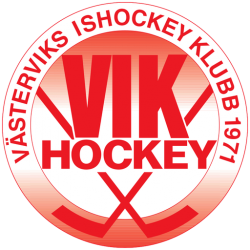 Västerviks Ishockeyklubb (English: Vasterviks Ice hockey club) – commonly known as Västerviks IK or VIK – is a professional ice hockey team based in Västervik, Sweden. They currently play in the second-highest league in Swedish ice hockey system, HockeyAllsvenskan. The club had spent decades yo-yoing between the third and fourth tiers of Swedish ice hockey, Division 1 and Division 2, before securing promotion on March 31, 2016, to HockeyAllsvenskan for the 2016–17 season.

The club was founded on April 28, 1971 when Västerviks AIS chose to close down its hockey section and only invest in football. The club got their nickname early on and is popularly called Vikarna. Västerviks home venue is Plivit Arena in central Västervik, which has a capacity of 2,500 people. The club almost reached the Swedish Hockey League (SHL) during the 1996–97 season and had a very successful season 2020–21 when they reached the semifinals, but went out against Timrå IK.

Plivit Arena is an indoor arena in Västervik, Sweden. t is the home arena of the Västerviks IK, ice hockey teams. Its current capacity is 2,500 spectators.