Swansea City Association Football Club (/ˈswɒnzi ˈsɪti/; Welsh: Clwb Pêl-droed Dinas Abertawe) is a Welsh professional association football club based in the city of Swansea, South Wales that plays in the Premier League. Swansea City represent England when playing in European competitions, although they have represented Wales in the past. They play their home matches at the Liberty Stadium.

The club was founded in 1912 as Swansea Town and joined the Football League in 1921. The club changed their name in 1969, when it adopted the name Swansea City to reflect Swansea's new status as a city.

In 1981, the club were promoted to the original Football League First Division. It was during the following season they came close to winning the league title, but a decline then set near the season's end before finishing sixth, although a club record. It was from here the club suffered a relegation the season after, returning to the Football League Fourth Division a few seasons later, then narrowly avoided relegation to the Football Conference in 2003. Prior to playing home matches at the Liberty Stadium, the team had previously hosted at the Vetch Field. The Swansea City Supporters Society Ltd owns 20% of the club, with their involvement hailed by Supporters Direct as "the most high profile example of the involvement of a supporters' trust in the direct running of a club". The club's subsequent climb from the fourth division of English football to the top division is chronicled in the 2014 film, Jack to a King – The Swansea Story.

In 2011, Swansea were promoted to the English Premier League, becoming the first Welsh team to play in it since its formation in 1992. On 24 February 2013, Swansea beat Bradford City 5–0 to win the 2012–13 Football League Cup (the competition's highest ever winning margin for the final), winning the first major trophy in the club's history and qualifying for the 2013–14 UEFA Europa League, where they reach the Last 32 stage but lost over two legs to SSC Napoli. Liberty Stadium (Welsh: Stadiwm Liberty) is a sports stadium and conferencing venue located in the Landore area of Swansea, Wales. The stadium is all-seated. It has a capacity of 20,750, making it the largest purpose-built venue in Swansea. It is the home stadium of Premier League club Swansea City and the Ospreys. As a result of Swansea City's promotion, the stadium became the first Premier League ground in Wales. The Liberty Stadium has the second smallest capacity of the 20 stadia in the Premier League for the 2014/15 season after Loftus Road. It is the third largest stadium in Wales – after Millennium Stadium and Cardiff City Stadium. In European competition the stadium is known as Swansea Stadium due to advertising rights.
With the Vetch Field, St Helen's and The Gnoll no longer being up-to-date venues to play at, and both the Swans and the Ospreys not having the necessary capital to invest into a new stadium, Swansea council and a developer-led consortia submitted a proposal for a sustainable 'bowl' venue for 20,520 seats on a site to the west of the River Tawe on the site of the Morfa Stadium, an athletics stadium owned by the City and County of Swansea council. It was funded by a 355,000 ft retail park on land to the east of the river. The final value of the development being in excess of £50m.

On 10 July 2005, Liberty Stadium was opened and became the home to Swansea City (replacing the Vetch Field) and the Ospreys (replacing St Helen's and The Gnoll). On 23 July 2005, Liberty Stadium was officially opened as Swansea City faced Fulham, (then managed by former Swansea player Chris Coleman) in an friendly match. The match ended in a 1–1 draw with the first goal being scored by Fulham's Steed Malbranque. Swansea's Marc Goodfellow scored during the game to level the match.

Before a league match between Swansea City and Oldham Athletic in October 2005, a statue of Ivor Allchurch was unveiled to commemorate the Swansea-born star who during two spells for the club scored a record 164 goals in 445 appearances.

The first capacity crowd recorded at Liberty Stadium was on the 1 November 2006 when The Ospreys beat Australia 24–16. The stadium has hosted multiple Wales football internationals, listed below.

Seating at Liberty Stadium is often sold out during Swansea City football matches. Swansea City have expressed a desire to have the capacity of the stadium increased and have held talks with Swansea Council during the 2011/2012 season for the future expansion of the Liberty Stadium which would be completed in a number of phases beginning with expansion or redevelopment of the east stand. Plans for a new McDonald's fast food restaurant to be opened near the stadium threw expansion plans into doubt. However, the planning application was withdrawn.

In December 2013, it was reported by BBC News that the European Commission had requested details of the funding of the stadium, as part of a wider inquiry into state aid for sports clubs.

At the start of the 2014-15 Premier League season, a number of changes were made to the stadium. These included two new 'Jumbotron' screens inside the north and south stands, measuring approximately 200 inches. Due to sponsorship by LG all televisions in food outlets and concourse were replaced by 50" LG TV screens and the south stand renamed The LG Stand. New advertising boards with a crowd facing side were also added. 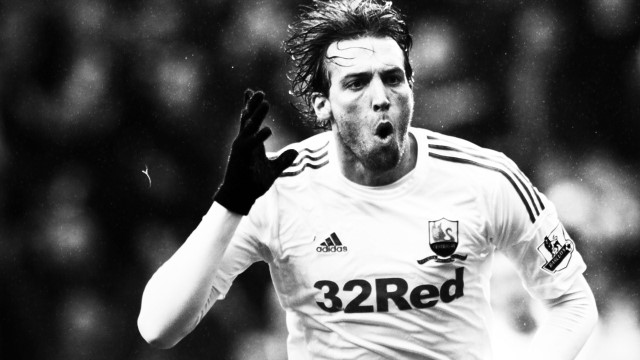