Portsmouth Football Club, is a professional football club based in the city of Portsmouth, England. Portsmouth's home matches have been played at Fratton Park since the club's formation in 1898. Portsmouth have been champions of England twice, in 1949 and 1950. The club has also won the FA Cup on two occasions, firstly in 1939 and most recently in 2008.

Portsmouth were moderately successful in the first decade of the 21st century, especially during the 2007-08 Premier League season, when they won the FA Cup, beating Cardiff City 1-0 in the final. They subsequently qualified for the 2008-09 UEFA Cup competing against European heavyweights such as seven-times European Cup winners A.C. Milan. During this period, Portsmouth were recognised to have a large number of international footballers, including England players Glen Johnson and Jermain Defoe, as well as Peter Crouch, David James and Sol Campbell. However, financial problems soon set in and Portsmouth were relegated to the Football League Championship in 2010. In 2012 they were again relegated, to League One, and again, in 2013, to League Two. They began the 2013-14 season in the fourth tier of the English football league system for the first time since the late 1970s. Fratton Park is a football stadium in the English city-port of Portsmouth. It has been the home of professional club Portsmouth F.C. since its construction in 1898.

The stadium currently has four stands, all seated. The pitch runs from east to west. The largest and most modern stand, at the ground's western end, is the Fratton End (previously commercially known by its sponsor name as Jobsite stand). Along either side of the pitch are the North and South stands, both of which are two-tiered. At the eastern end is the Milton End (sponsored as Apollo stand), by far the smallest stand. Formerly the only roofless stand in the Premier League, a roof was added before the 2007-08 season. This stand is shared between home and away supporters. The original entrance to the Fratton End is notable for its mock Tudor façade. Following the arrival of former owner Alexandre Gaydamak several renovations were made to Fratton Park, including improved dressing rooms, the above-mentioned roof over the Milton end and a big-screen above the police box between the North Stand and Milton End. The North Stand was refreshed for the 2010-11 season with renewed sponsorship by Mercedes-Benz (Ridgeway Group) which replaced the "Fratton Park Portsmouth" and the club crest.

The stadium is served by Fratton railway station (about 10 minutes' walk away), which is located on the Portsmouth Direct Line. 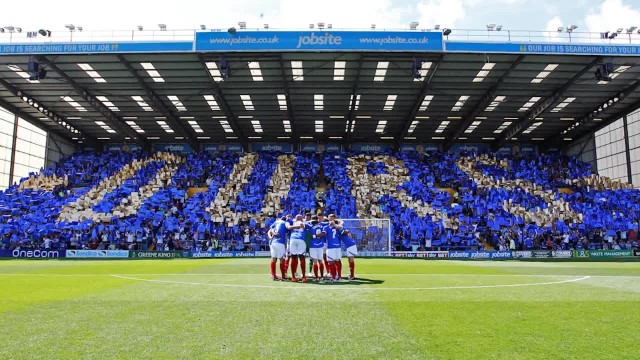