Football Club de Nantes (Breton: Naoned, Gallo: Naunnt; commonly referred to as simply Nantes) is a French association football club based in Nantes, Pays de la Loire. The club was founded on 21 April 1943, during World War II, as a result of local clubs based in the city coming together to form one big club. From 1992–07, the club was referred to as FC Nantes Atlantique before reverting to its current name at the start of the 2007–08 season. Nantes will play in Ligue 1, the first division of French football in the 2014–15 season. The first-team is currently managed by Franco-Armenian coach Michel Der Zakarian and captained by defender Olivier Veigneau.

Nantes is one of the most successful clubs in French football having won eight Ligue 1 titles, three Coupe de France wins, and attained one Coupe de la Ligue victory. The club is famous for its jeu à la nantaise (Nantes-style play), its collective spirit, mainly advocated under coaches José Arribas, Jean-Claude Suaudeau and Raynald Denoueix and for its youth system, which has produced players such as Marcel Desailly, Didier Deschamps, Mickaël Landreau, Claude Makelele, Christian Karembeu or Jeremy Toulalan. As well as Les Canaris (The Canaries), Nantes is also nicknamed Les jaunes et verts (The Green and Yellows) and La Maison Jaune (The Yellow House). The stadium opened for the first time on May 8, 1984, for a friendly game: FC Nantes - Romania. It was named after Louis Fonteneau, who was President of FC Nantes between 1969-1986. It was renovated in 1998, for the World Cup. While its original capacity was 52,923, in 1998, it was converted to an all-seater stadium and its current capacity is 38,285. Previously, the team played at Stade Marcel Saupin.

The stadium also hosts international rugby matches, including France against New Zealand (16-3) on November 15, 1986. In September 2007, it hosted three pool matches of the 2007 Rugby World Cup: Wales vs Canada on September 9, England vs Samoa on September 22 and Wales vs Fiji on September 29. In domestic rugby, La Beaujoire hosted both Top 14 semifinal matches in 2013, and Paris-area Top 14 side Racing Métro 92 will play their final "home" match of the 2013–14 season against Clermont at La Beaujoire on April 19, 2014.

La Beaujoire hosted matches during the 1984 European Football Championship, including a 5-0 victory for France over Belgium. Six matches were also played there during the 1998 FIFA World Cup, including the quarter-final between Brazil and Denmark.

The France national football team have played here on four occasions, most recently 2007 in a EURO 2008 qualifying match against Lithuania (2-0). 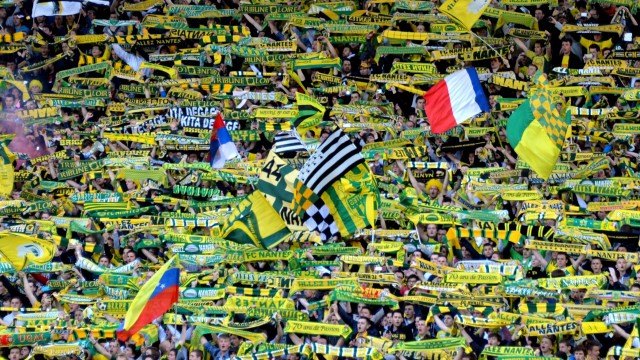