Brentford Football Club are a professional football club based in Brentford, West London, England. The team will compete in the Premier League for the 2021–22 season, the first tier of the English football league system. Nicknamed "the Bees", the club was founded in 1889 and played home matches at Griffin Park from 1904 before moving to Brentford Community Stadium in 2020. Their main rivals are fellow West London clubs Chelsea, Fulham, and Queens Park Rangers.

Brentford initially played amateur football before they entered the London League in 1896 and finished as runners-up of the Second Division and then the First Division to win election into the Southern League in 1898. They won the Southern League Second Division in 1900–01 and were elected into the Football League in 1920. Brentford won the Third Division South title in 1932–33 and the Second Division title in 1934–35. They spent five seasons in the First Division, reaching a peak of fifth in 1935–36, before three relegations left the club in the Fourth Division by 1962. Crowned Fourth Division champions in 1962–63, Brentford were relegated in 1966 and again in 1973 after gaining promotion in 1971–72. They spent 14 seasons in the Third Division after gaining promotion in 1977–78 and went on to win the Third Division title in 1991–92, though were relegated again in 1993.

Brentford were relegated into the fourth tier in 1998 and won promotion as champions in the 1998–99 campaign. They were relegated in 2007 and won promotion as champions of League Two in 2008–09 and then were promoted out of League One in 2013–14. They had unsuccessful Championship play-off campaigns in 2015 and 2020. Brentford have a poor record in finals, finishing as runners-up in three Associate Members' Cup / Football League Trophy finals (1985, 2001 and 2011) and losing four play-off finals (the 1997 Second Division final, 2002 Second Division final, 2013 League One final and 2020 Championship final). However, Brentford won the 2021 Championship final to be promoted to the highest level for the first time since 1946–47 season. Griffin Park is a football ground in Brentford, situated in the London Borough of Hounslow, west London. It has been the home ground of Championship side Brentford since it was built in 1904. The ground is known for being the only English league football ground to have a pub on each corner and is situated in a predominantly residential area. The ground gets its name from the griffin, featured in the logo of Fuller's Brewery, which at one point owned the orchard on which the stadium was built.

Between forming in 1889 and prior to 1904, Brentford played at five grounds around Ealing - Clifden Road, Benns Field, Shotters Field, Cross Road and Boston Park Cricket Ground. In 1903, Fulham chairman Henry Norris (a prominent estate agent), Brentford manager Dick Molyneux and club president Edwin Underwood negotiated a 21 year lease at a peppercorn rent on an orchard along the Ealing Road (owned by local brewers Fuller, Smith and Turner), with the option to buy the freehold at a later date for £5000. After a gypsy camp was removed from the site, work began on building the ground in January 1904, under the guidance of architects Parr & Kates.

The ground was named 'Griffin Park' after a nearby pub, The Griffin, which was owned by the Griffin Brewery and was used as dressing rooms and for accommodation. After a number of trial games, Griffin Park was opened on 1 September 1904. The first match at the ground was played that day - a Western League fixture versus Plymouth Argyle, with 5,500 spectators watching the sides play out a draw. The first Football League match to be played at the ground was on the opening day of the 1920/21 season, a 3-0 Third Division defeat to Exeter City. 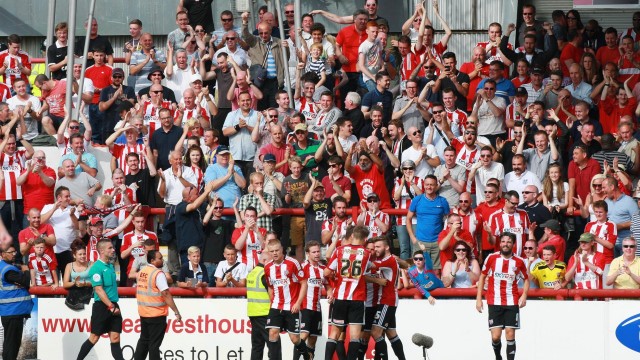