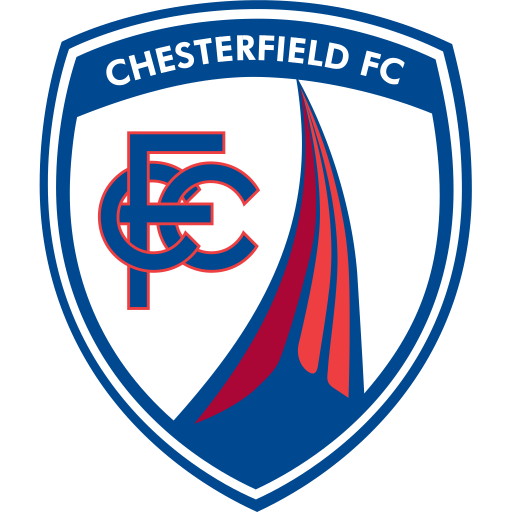 Chesterfield Football Club /ˈtʃɛstərfiːld/ is a professional association football club based in the town of Chesterfield, Derbyshire, England. The team competes in the National League, the fifth tier of the English football league system. Chesterfield play their home games at the 10,504 capacity Proact Stadium, having moved from their historic home of Saltergate during the summer of 2010. Notable players include record appearance holder Dave Blakey, who played in 617 of Chesterfield's league games, and 162 league goal club record holder Ernie Moss. The club contests numerous minor local rivalries, though Nottinghamshire club Mansfield Town are considered to be their main rivals.

Chesterfield F.C. was officially established in 1866, though it would be the third incarnation of that name that turned professional in 1891 and changed its name to Chesterfield Town. Town entered the FA Cup for the first time the following year, and competed in the Sheffield & District League and Sheffield & Hallamshire Senior Cup, before joining the Midland League in 1896–97. A third-place finish in 1898–99 resulted in a successful application to the Football League Second Division for the following season. After ten seasons in the Second Division they failed to gain re-election to the League and returned to the Midland League in 1909, finishing as champions in 1909–10. The club entered liquidation in 1915, and were reformed as Chesterfield Municipal in April 1919. They again rejoined the Midland League and finished as champions in 1919–20.

The club was renamed to Chesterfield F.C. in December 1920, and became founder members of the Third Division North in 1921–22. They marked their tenth season in the division, 1930–31, by winning the title, though only managed two seasons in the Second Division before suffering relegation. They again won the Third Division North title in 1935–36, and after World War II recorded their best ever league finish of fourth in the Second Division in 1946–47. However they were relegated again in 1950–51, and were relegated out of the Third Division in 1960–61. Chesterfield won the Fourth Division in 1969–70, and then won the Anglo-Scottish Cup in 1980. After relegation in 1982–83, they again won the Fourth Division title in 1984–85, though would again be relegated after five seasons in the third tier. They secured their return to the third tier with a 2–0 win over Bury in the 1995 play-off Final at Wembley.

Chesterfield reached the FA Cup semi-finals in 1997, but were relegated back to the basement division in 1999–2000. They made an immediate return to the third tier after securing a Third Division automatic promotion place in 2000–01. Relegated in 2006–07, they secured the League Two title in 2010–11, but were relegated from League One the following season. In 2011, Dave Allen took full ownership of the club and oversaw progress to two League Trophy finals; Chesterfield won the trophy with a 2–0 victory over Swindon Town in 2012, and finished as runners-up after losing 3–1 to Peterborough United in 2014. Chesterfield were crowned champions of League Two for a record fourth time in 2013–14, but remained in League One for just three seasons. Two consecutive relegations saw the club relegated out of the English Football League at the end of the 2017–18 season. The Proact Stadium (formerly known as the b2net Stadium) is an all-seater football stadium in Whittington Moor, Chesterfield, Derbyshire, on the site of the former Dema Glassworks. It is the home of Chesterfield F.C., replacing the Saltergate Recreation Ground as the club's stadium from the start of the 2010–11 season.

It has a capacity of approximately 10,500, cost £13,000,000 to build and was designed by Sheffield-based architects Ward McHugh Associates.

Initial sponsorship under the name the b2net Stadium was revealed on 14 August 2009. However, after two seasons and following the acquisition of b2net by Swedish company Proact, the renaming of the stadium to the "Proact Stadium" was officially announced on 13 August 2012.

The stadium has been chosen to stage England Under 19 and Under 21 fixtures, and hosts numerous non-footballing functions, from weddings to pop concerts.