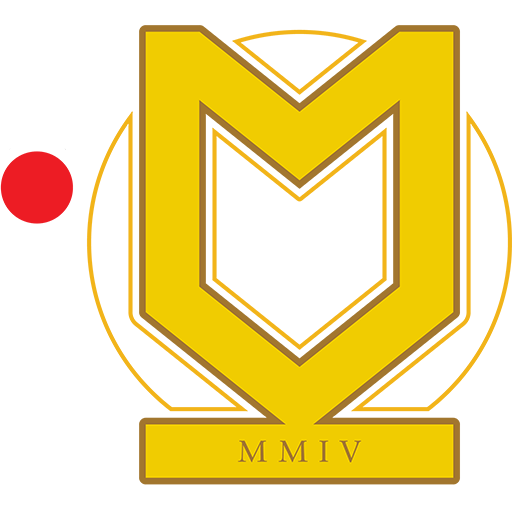 Milton Keynes Dons Football Club (/ˌmɪltən ˈkiːnz ˈdɒnz/), usually abbreviated to MK Dons, is a professional association football club based in Milton Keynes, Buckinghamshire, England. The team will compete in League One, the third tier of the English football league system, after gaining promotion at the end of the 2018–19 season.

The name Milton Keynes Dons was registered in June 2004 after Wimbledon F.C., formed in 1889, had been based at the National Hockey Stadium in Milton Keynes for nine months. The club kept its place in the English league structure after changing its name, kit and logo, competing as MK Dons from the start of the 2004–05 season. The club abandoned its claim to any history before 2004 in October 2006 as part of an agreement with the Football Supporters' Federation, which had previously boycotted the team and its supporters' groups. Under this deal MK Dons transferred Wimbledon F.C.'s trophies and other patrimony to Merton Council in south London in 2007.

MK Dons were relegated to the fourth-tier League Two at the end of the 2005–06 season. Under the management of Paul Ince, the club won the 2007–08 League Two title, thereby gaining promotion back to League One, and the Football League Trophy during the same year. The team has remained in League One since the 2008–09 season and has been managed by Karl Robinson since 2010. The club has built a strong reputation for youth development—since 2004 it has given first team debuts to 14 local academy graduates. Stadiummk (initially named as stadium:mk, stylistically stadiummk, and also known locally as "Denbigh Stadium") is a football ground in the Denbigh district of Milton Keynes, Buckinghamshire, England. Designed by Populous, it has completed phase one construction by civil engineering company Buckingham Group Contracting. It is the home ground of Milton Keynes Dons FC.

The stadium was officially opened on 29 November 2007 by the Queen.

The current configuration of the stadium uses two tiers which hold a capacity of 30,500. Should it be required, there is the option to increase the capacity of the stadium again to 45,000 with the addition of a third tier, hence the high roof. The design will comply with UEFA's Elite Stadium specifications and includes a Desso GrassMaster playing surface.

The plans of the complex include an indoor arena, arena:mk, that was to be the home of the Marshall Milton Keynes Lions professional basketball team from 2008. However, the retail developments that would have provided enabling funding have been deferred due to the national economic situation, leaving the Lions without a home. Following the conclusion of the 2011-12 season, despite pleas to many local businesses, the Lions could not secure a venue within Milton Keynes, resulting in a move south to the Copper Box, a multi-sport venue that was used for the 2012 Summer Olympics, the Lions played their first game at the Copper Box on 14 August 2013 in front of a sell-out crowd.

In addition to association football, the stadium is occasionally host to rugby union. In May 2008, Saracens (who at the time groundshared with Watford at Vicarage Road) played Bristol at stadiummk because Watford needed their ground for a Championship play-off. In 2011, Northampton Saints RFC used the ground for their Heineken Cup quarter and semi final matches because their home ground is too small for major events. Saracens once again visited for their home Aviva Premiership fixture against Northampton Saints on 30 December 2012 while their new stadium at Barnet Copthall was still being built. The stadium will host 3 matches in the 2015 Rugby World Cup.