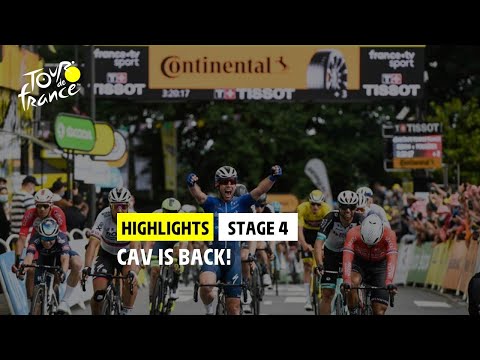 The Tour phone rings again for the sprinters of the multicolored serpent. Another flat stage. Another chance to see a volata at the end. This time it is only 152 kilometers without any scoring port. eye! Only the God Aeolus, and his traditional ability to move everything with the wind, could turn a quiet day into a more hectic one because of the fans.


Result Description
The fourth stage of the Tour took the riders from Redon to Fougères. The route offered another chance for the sprinters to shine as there were no categorised climbs on the course. The only intermediate sprint of the day took place with 36 kilometres (22 mi) to go.

As soon as the riders reached kilometre zero, the whole peloton stopped for a full minute as a form of protest in the aftermath of the crashes in the previous day. The riders had felt that the crashes were partly due to the dangerous run-in to Pontivy. After stopping at kilometre zero, the riders also rode slowly for the first 10 kilometres (6.2 mi). As soon as those kilometres passed, Brent Van Moer (Lotto–Soudal) became the first rider to go on the attack, and he was soon joined by Pierre-Luc Périchon (Cofidis). The peloton never gave the lead duo much of an advantage, with the gap maxing out at around three minutes before the sprinters' teams began to chase them down. After the two breakaway riders took the maximum points at the intermediate sprint, Michael Mørkøv (Deceuninck–Quick-Step) successfully led out his teammate Mark Cavendish, who took the maximum remaining points on offer.

With the break's advantage being reduced to around 30 seconds with 15 kilometres (9.3 mi) to go, Périchon launched an attack that was immediately answered by Van Moer. Van Moer countered with an attack of his own, successfully dropping his breakaway companion as the peloton continued to chase behind. Soon after, the pace slowed in the peloton, allowing Van Moer's lead to increase to more than a minute. The lead stabilised until around 7.5 kilometres (4.7 mi) were left on the stage, at which point the pace in the peloton increased. Van Moer's lead rapidly decreased as the sprinters' teams set up their riders for the finish. With 1.5 kilometres (0.93 mi) to go, Van Moer still maintained a 15-second lead, but the peloton was rapidly closing in on him. Van Moer was eventually caught with 200 metres to go as the previous day's winner, Tim Merlier (Alpecin–Fenix), led out his team's other sprinter, Jasper Philipsen. Philipsen opened up the sprint but Cavendish came around him to take his 31st Tour stage win. Nacer Bouhanni (Arkéa–Samsic) finished second while Philipsen held on for third. As a result of his win, Cavendish also took the lead in the points classification. There was no change in the GC, with Mathieu van der Poel (Alpecin–Fenix) holding an eight second lead over Julian Alaphilippe (Deceuninck–Quick-Step) ahead of the race's first individual time trial.