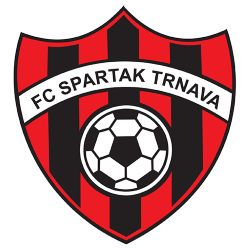 FC Spartak Trnava is a Slovak professional football club based in Trnava. Historically, it is one of the most successful clubs in country, having won both the Czechoslovak First League and the Czechoslovak Cup five times, and reaching the semi-final of the European Cup once and the quarter-final twice. The club's official anthem is Il Silenzio.

The club was founded on 30 May 1923 by the merger of Šk Čechie and ČšŠk into TSS Trnava. After a communist takeover it became affiliated with the metal industry and was renamed to TJ Kovosmalt ("Metal-enamel"). In 1952, the club gained its current name.

Štadión Antona Malatinského is a football stadium in Trnava, Slovakia.

It is used for football matches of local football club Spartak Trnava. It has been named after former footballer and manager Anton Malatinský since 1998.

Spartak Trnava officially announced the intention on 25 November 2011, and after that preparation works began immediately. Three out of four stands (including old floodlight) were completely demolished between April and August 2013. Construction permit was granted in August 2013 and cornerstone of the stadium was placed in September 2013. Spartak Trnava continued playing at the stadium even during the reconstruction, with only West stand in service. In May 2015, the last of the four stands was demolished and subsequently rebuilt.