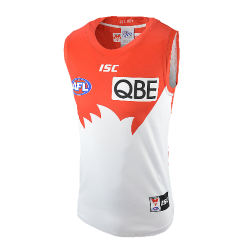 The Sydney Swans are an Australian rules football club which plays in the Australian Football League (AFL). The club has been based in Sydney since the South Melbourne Football Club was relocated to Sydney in 1982. Sydney was the first club in the competition to be based outside Victoria. The Swans play their home games at the Sydney Cricket Ground.

The club has proven to be one of the most consistent teams over the last twenty years of AFL football, only failing to make the finals in three seasons since 1995 and boasting a finals winning record of over 50% in the same time period.

The South Melbourne Football Club was founded in 1874 and was strong through the 1880s. It won three premierships in 1909, 1918 and 1933 before experiencing 72 years without a premiership, the longest premiership drought of any club. The club broke the drought in 2005, and has won one more premiership since, in 2012. The Sydney Cricket Ground (SCG) is a sports stadium in Sydney, Australia. It is used for Test cricket, One Day International cricket, Twenty20 cricket and Australian rules football, as well as some rugby league football and rugby union matches. It is the home ground for the New South Wales Blues cricket team, the Sydney Sixers of the Big Bash League and the Sydney Swans Australian Football League club. It is owned and operated by the SCG Trust that also manages the Sydney Football Stadium located next door. Until the 44,000 seat Football Stadium was opened in 1988, the Sydney Cricket Ground was the major rugby league venue in Sydney.