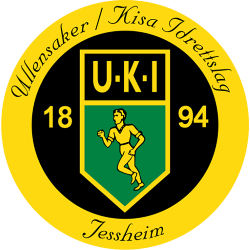 Ullensaker/Kisa IL is a Norwegian sports club from Jessheim in Ullensaker. Founded in 1894, it has sections for association football, team handball and athletics.

The men's football team currently plays in Adeccoligaen. They played in Norwegian Second Division from 1999, and their long-term goal was to win promotion to Adeccoligaen, which they achieved in 2011.

Its stadium, Jessheim stadion, is quite dilapidated. Therefore, the club is planning a new stadium that will take between 1000-5000 spectators.

In May 2009 Ull/Kisa performed well in the Norwegian Football Cup 2009, upsetting Sandefjord Fotball 1-0 in the second round. The goal was scored by Mats Jarnbjo in the 61st minute. In the third Vålerenga Fotball was too strong, as Ull/Kisa lost 3-5 at Ullevaal Stadion. Eirik Soltvedt scored all the goals of Ull/Kisa.

In the middle of the 2010 season Arne Erlandsen was appointet by Ull/Kisa as their new coach. He saved the club from relegation to Norwegian Third Division this autumn, and decided to sign for another year. 2011 was a remarkable year for both Arne Erlandsen and Ull/Kisa. The Jessheim-club promoted to Adeccoligaen for the first time in history. October 16, 2011 Ull/Kisa won 4-1 against Tiller IL, when Lørenskog IF at the same time played a 3-3 draw against KFUM Oslo, which meant that Ull/Kisa was five points ahead, with only one match left to play. The match against Tiller IL was the last game the club played at Jessheim Stadion.