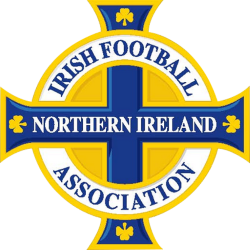 Northern Ireland has competed in three FIFA World Cups, reaching the quarter-final stage in the 1958 and 1982 tournaments. Northern Ireland held the accolade of being the smallest nation to qualify for a World Cup Finals from their first appearance in 1958 until 2006, when Trinidad and Tobago qualified for the 2006 World Cup. At UEFA Euro 2016, the team made its first appearance at the European tournament and reached the round of 16.

Named after the district in south Belfast in which it is located, Windsor Park was first opened in 1905, with a match between Linfield and Glentoran. The first major development of the stadium took place in the 1930s, to a design made by the Scottish architect Archibald Leitch. It had one main seated stand - the Grandstand, later known as the South Stand - with "reserved" terracing in front, and a large open terrace behind the goal to the west called the Spion Kop. To the north, there was a long covered terrace – the "unreserved" terracing – and behind the eastern goal at the Railway End another covered terrace. Windsor Park's peak capacity in this format was 60,000. In the early 1960s, the seated Railway Stand was built at the Railway End, and in the early 1970s a social club and viewing lounge was constructed in the corner between the Railway Stand and the Grandstand. In the 1980s, the 'unreserved terrace' was demolished and replaced by a two-tier, 7000-seat North Stand. In the late 1990s, the Kop terrace was demolished and replaced with a 5000-seater Kop Stand. The Kop Stand was known as the Alex Russell Stand from 2004–2008 in honour of Linfield's former goalkeeper and coach and one-time Northern Ireland international, but reverted to being named 'The Kop Stand' following this.