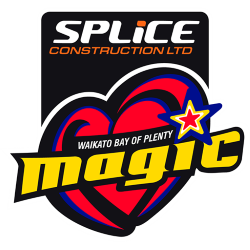 The Waikato Bay of Plenty Magic are a New Zealand netball team based in Waikato that currently compete in the ANZ Premiership. The franchise was formed in 1999 during the Coca-Cola Cup (later the National Bank Cup) as an amalgamation of two teams from the inaugural season, the Waikato Wildcats and the Bay of Plenty Magic. After the National Bank Cup was retired in 2007, the Magic joined four other New Zealand franchises in the new ANZ Championship, representing the New Zealand regions of the Waikato and the Bay of Plenty. The ANZ Championship ended in 2016, and the Magic joined five other New Zealand teams in the new ANZ Premiership competition the following year.

Home games are usually played at Mystery Creek Events Centre in Hamilton, although some matches are played at the Energy Events Centre in Rotorua and the Queen Elizabeth Youth Centre in Tauranga. The team uniform is primarily black with yellow and orange stripes, in line with traditional Waikato Rugby Union colours. Their alternate uniform has the black and yellow colours swapped around. In 2018 the Magic are coached by Margaret Forsyth, with former Magic captain Amigene Metcalfe as assistant coach; Silver Ferns veteran Casey Kopua continues her role as captain.

The Magic won two National Bank Cup titles, in 2005 and 2006. During the ANZ Championship, their playing roster has consistently included a large number of international players, which has been both a point of controversy and has been attributed with bringing about their initial success in the competition. The Magic won the 2012 ANZ Championship becoming the first New Zealand and only team to win the competition.

Claudelands Arena is a multi-purpose indoor sports and entertainment centre located in Hamilton, New Zealand. Claudelands contains a 6000-capacity arena and four-star conference and exhibition centre. Construction began on the arena in 2007 and was completed in 2011 at a cost of $68.4 million ($NZD). The arena includes a unique C-shaped auditorium, the only one of its kind in New Zealand and Australia, which is fully retractable and capable of holding live music and entertainment, international sporting events, large banquets, conferences and exhibitions. The arena is one of the home venues for the Waikato Bay of Plenty Magic netball team in the ANZ Championship. The New Zealand Breakers have played pre-season games at the venue in 2011 and 2012.