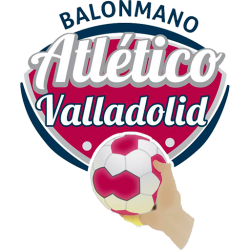 The Valladolid Athletic Handball Club is a handball club in the city of Valladolid , Spain . It was founded in June 2014 with the objective of maintaining the elite handball in the city after the disappearance of the historic Valladolid Handball Club.
Atlético Valladolid debuted in the highest category of Spanish handball, the Asobal League , in the 2016-2017 season.

The Huerta del Rey Sports Center is a sports center in the Spanish town of Valladolid , located in the homonymous neighborhood . Opened in 1975 , it has a capacity of 3502 people.
With the construction of the Pisuerga Sports Center in 1985 , the Valladolid Basketball Club moved to the new sports center, leaving the Valladolid Handball Club , until its disappearance in summer 2014, as the most important user club in the pavilion. As of September 2014, there are two clubs that dispute their meetings in this pavilion, the Valladolid Athletic Handball Sports Club and the Cultural Classroom Handball Sports Club .