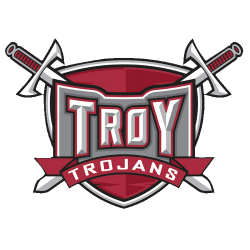 The Troy Trojans men's basketball program is the intercollegiate men's basketball of Troy University. The program is classified in NCAA Division I and the team competes in the Sun Belt Conference. The team currently plays their home games in Trojan Arena, which was built in 2012 and replaced the old arena known as Sartain Hall. Troy's first season was in 1950 under then head coach Buddy Brooks. As of the end of the 2012–2013 season, the Troy Trojans program holds a 989–784 overall record since the team was first formed in 1950.

Trojan Arena is a 6,000-seat arena that is home to the Troy Trojans men's and women's basketball, volleyball and track programs. It is also used for the University's commencement ceremonies and special events. The arena replaced the University's longtime basketball and events facility, Sartain Hall, which opened in 1962. Trojan Arena has been considered to be one of the most modern and technologically advanced basketball facilities in the southeastern United States since it was completed in 2012. The total cost to build the arena was $40 million.
The arena is designed to be used for many other multi-purpose reasons, including concerts, banquets, indoor sports tournaments, and graduation ceremonies.