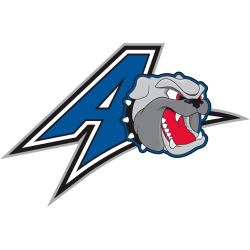 The UNC Asheville Bulldogs men's basketball team is the men's basketball team that represents the University of North Carolina at Asheville in Asheville, North Carolina, United States. Their current head coach is Mike Morrell. The school's team currently competes in the Big South Conference.
The Bulldogs have appeared in the NCAA Tournament four times. Their combined record is 2–4. Their highest seed is #15 in 2016.

Kimmel Arena is the home of the UNC Asheville Bulldogs basketball programs, both men and women's. It is a 3,200-seat arena located on the campus of the University of North Carolina at Asheville in Asheville, North Carolina. Kimmel Arena, named for local businessman Joe Kimmel, is part of the much larger Wilma M. Sherrill Center, which is a 133,500-square-foot (12,400 m2) facility. The arena held its first games, both exhibitions, on November 7, 2011, and formally opened November 13, 2011, as UNC Asheville hosted the University of North Carolina Tar Heels. It replaces the Justice Center as UNCA's home court, but the latter will remain as a training facility and physical education complex.