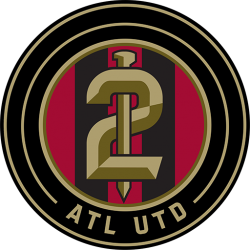 Atlanta United 2 is the reserve team of the Major League Soccer club Atlanta United FC. The team plays in the USL Championship, the second tier of American soccer. The team was established on November 14, 2017 and began their first professional season in March 2018.

History
In November 2017, the USL, a Division II sanctioned league by the United States Soccer Federation (USSF), announced that Major League Soccer's Atlanta United had acquired a USL affiliate team and would begin play in the 2018 season. On January 9, 2018, the team name was revealed as Atlanta United 2.

The team played their inaugural season at Coolray Field in Lawrenceville, Georgia, with a capacity of 7,362 for soccer games. Coolray Field is a Triple-A baseball stadium originally built in 2008 for the Gwinnett Stripers, the Atlanta Braves Triple-A affiliate. The stadium has been fitted for semi-professional soccer in a standard baseball to soccer pitch configuration.

The premium boxes and all stadium areas will still be available for soccer games, and the field will also be the same standard length at 70 by 110 yards (64 m × 101 m).

Atlanta United 2 announced on December 14th, 2018 that they would play their 2019 home matches at Fifth Third Bank Stadium in Kennesaw, Georgia.