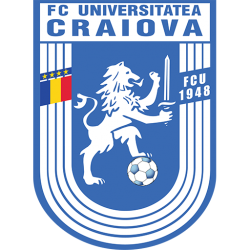 FC U Craiova 1948 is a Romanian football club based in Craiova, Dolj County, and currently a member of the Liga II.

In 1991, promptly after the CS Universitatea Craiova sports club dissolved its football department, Fotbal Club Universitatea Craiova took its place in the first division. It was generally considered the same entity with the old club, and continued its tradition for the next two decades, but was reorganised multiple times and retroactively deemed an unofficial successor. FC U's only major honour would be the 1992–93 Cupa României, although it also claims the four national titles and five national cups won between 1948 and 1991.

FC U Craiova was disaffiliated by the Romanian Football Federation in May 2012, following their temporary banishment since July 2011, and consequently retired from every competition. The Romanian Court confirmed that the 2012 disaffiliation was legal and in September 2014 the team was officially declared bankrupt. The club was reestablished in 2017 and commenced play in the fourth league, and is currently one of the two entities asserting the history of the original club, along with first division side CS Universitatea Craiova.

Stadionul Tudor Vladimirescu is a multi-purpose stadium in Târgu Jiu, Romania. It serves as the home ground of Pandurii Târgu Jiu, Viitorul Pandurii Târgu Jiu and FC U Craiova 1948. The facility can also be used for a variety of other activities such as track and field and concerts.

It was opened on 25 October 2019 when Gorj County native Constantina Diță cut the ribbon on new stadium.