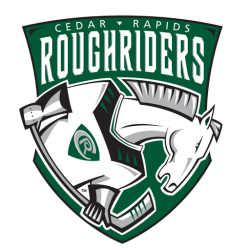 The Cedar Rapids RoughRiders are a Tier I junior ice hockey team playing in the United States Hockey League (USHL). The team is on hiatus for the 2020–21 season. Before moving to Cedar Rapids, Iowa, in 1999, the team was based in Mason City, where they were known as the North Iowa Huskies.

The RoughRiders' home ice is the ImOn Ice Arena also known as The Stable.

The ImOn Ice Arena is a 3,850-seat multipurpose arena in Cedar Rapids, Iowa, located adjacent to Veterans Memorial Stadium. The arena opened on January 8, 2000, and is owned by the city of Cedar Rapids. It is home to the Cedar Rapids RoughRiders of the United States Hockey League as well as several local youth hockey teams. The University of Iowa Hawkeyes club hockey team plays some of their home games at the facility. The arena contains separate sheets of ice for ice hockey games and for public and figure ice skating. ImOn Communications purchased naming rights to the arena from the city through 2024.

For the 2012 and 2013 seasons, it was the temporary home to the Cedar Rapids Titans indoor football team as the U.S. Cellular Center, where they started playing in 2014 and beyond, was being renovated.

The arena was severely damaged by a derecho storm which hit Cedar Rapids on August 10, 2020. The RoughRiders hockey team announced on September 18, 2020 that they would not participate in the 2020-2021 USHL season, because of the damage to the arena. Repair costs, initially estimated at $4 million, were reported in January 2021 to have risen to "the $6-million range."