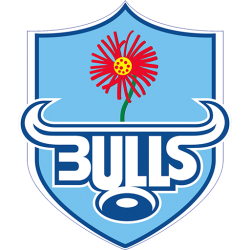 The Blue Bulls (known for sponsorship reasons as the Vodacom Blue Bulls) is a South African rugby union team that participates in the annual Currie Cup tournament. They are governed by the Blue Bulls Rugby Union and are based at Loftus Versfeld Stadium in Pretoria, Gauteng province.

When Vodacom became the team's major sponsor their name was added. Previously the side was sponsored by ExxonMobil and known as the Mobil Blue Bulls. Their main colour is blue and their emblem a bull's head and horns.

Loftus Versfeld Stadium is a rugby union and Association football (soccer) stadium situated in the Arcadia suburb of the city of Pretoria in the Gauteng province of South Africa. The stadium has a capacity of 51,762 for rugby union and it is occasionally used for football matches.