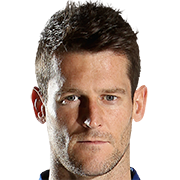 David James Nugent (born 2 May 1985) is an English professional footballer who plays as a striker for Preston North End.

Before joining Middlesbrough, Nugent made 449 appearances in the Football League and Premier League playing for Bury, Preston North End, Portsmouth, Burnley and Leicester City. While a Preston player he made his debut for England, having played for the under-21 team earlier in his career.

Born in Huyton, Merseyside, Nugent was a member of the Liverpool youth academy but left aged 15. It was only once he changed his position that he then became a professional with Bury, joining the club's successful Youth and Centre of Excellence department. After making his debut as a substitute against Port Vale in March 2002 at the age of just 16, Nugent initially struggled to live up to his early potential, but an explosive start to the 2004–05 League Two season saw several larger clubs take an interest.

Nugent has stated that he is an Everton supporter. In 2016, Nugent served as best man at former team-mate Jamie Vardy's wedding.