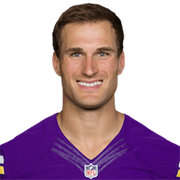 Kirk Daniel Cousins (born August 19, 1988) is an American football quarterback for the Minnesota Vikings of the National Football League (NFL). He played college football at Michigan State, where he was the Spartans' starter from 2009 to 2011, and was drafted by the Washington Redskins in the fourth round of the 2012 NFL Draft. Originally drafted as a backup to fellow rookie Robert Griffin III, he would occasionally appear in games, along with a few starts, during his first three seasons with the team. In the 2015 preseason, Cousins replaced an injured Griffin and remained the team's starter from then until the 2017 season.

During his time with the Redskins, he set numerous franchise records and appeared in the 2017 Pro Bowl. After two years of being unable to agree with the Redskins on a long-term deal, signing two franchise tags in the process, he signed a three-year, fully guaranteed $84 million contract as a free agent with the Vikings in 2018. At the time, this deal made him the highest paid player on a per-year basis in NFL history.