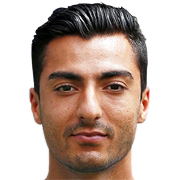 Jiloan Hamad (born 6 November 1990) is a Swedish footballer who plays as a winger for Hammarby IF in Allsvenskan.

Early and personal life
Hamad was born in Azerbaijan, and is of Kurdish descent. His family originates from Ranya, Iraqi Kurdistan. They were seeking refugee status in both Turkmenistan and Russia before settling in Sweden in 1992, when Jiloan was two years old. Mohammed Hamad, Jiloan's father, was a guerrilla warrior in the Kurdish peshmerga for 15 years before fleeing Iraq together with his wife and children.

Club career
BK Forward
Jiloan Hamad started his footballing career at the local club BK Forward in Örebro, where he grew up. He debuted in the senior team in 2006, aged 16, when the club competed in the Swedish third tier called Division 1. During the upcoming two seasons, he played 23 competitive games for the club, scoring 8 goals. During this period, he enjoyed a fruitful partnership with Jimmy Durmaz, his childhood friend who later would move on to play with him at Malmö FF. Before switching to the Scanian team he was refused by the local giants Örebro SK, with the club citing that Hamad "was too short".

Hamad with Malmö FF in 2011
Hamad came to Malmö FF from BK Forward in December 2007. He made his Allsvenskan debut on 17 September 2008 in a 0–4-loss against IF Elfsborg. After only having played one match for the club in 2008, Hamad had a breakthrough in 2009 when he played 20 matches and scored two goals. In 2010, he battled with teammate Jimmy Durmaz for the position as left midfielder. Hamad ended up playing 27 games although only starting in 10, the majority of which were played as right midfielder. In the final game of 2010, he scored the game-winning goal against Mjällby AIF that secured the title, the day after his 20th birthday.

In 2011, Hamad started the season with injury problems and missed the start of the season. He recovered and became the natural choice for playing right midfielder after team-mate Guillermo Molins was sold in the summer transfer window of 2011. Hamad also participated in the clubs campaign to qualify for the 2011–12 UEFA Champions League and scored the goal that took the club through to the play-off round after equalizing at home against Rangers. He continued to play in Europe as the club qualified for the group stage of the 2011–12 UEFA Europa League after losing in the play-off round of the Champions League. During the 2011 season Hamad signed a new contract to the end of the 2013 season.

Hamad played all of Malmö FF's 30 league matches during the 2012 season. He also scored six goals which was his best goal production since joining the club. Hamad was also given the captaincy for the majority of the teams matches. Former captain Daniel Andersson had stepped down to focus on coaching duties before the beginning of the season and new captain Ulrich Vinzents received limited time on the pitch.

The 2013 season was Hamad's first and only season as full-time captain for the club. In total he played 28 matches and scored eight goals in the league. He also played all matches for the club during the qualification stage for the 2013–14 UEFA Europa League and scored two goals. Some of his goals in the early part of the season was match-deciding, on 14 April 2013 he scored the only goal of the game in the home fixture against Kalmar FF, one week later he made the same accomplishment in the away fixture against AIK. Malmö FF secured the title one round before the competition of the league and Hamad could raise Lennart Johanssons Pokal on 3 November 2013 after a last home win against Syrianska FC. His last match for the club was the 2013 Svenska Supercupen against IFK Göteborg which Malmö FF won 3–2. For his performances in the 2013 Allsvenskan season he won midfielder of the year and was also nominated for most valuable player of the year.

TSG 1899 Hoffenheim
On 30 October 2013, German Bundesliga club 1899 Hoffenheim confirmed the free transfer of Jiloan Hamad to the club with a contract until 2017. The transfer went through on 1 January 2014 when the German transfer window opened. During the same spring he played 8 competitive games for his new side.

After attracting a serious injury during his loan spell at Standard Liège in 2015, he made his comeback for Hoffenheim in a Bundesliga fixture against Bayer Leverkusen on 23 January 2016, in which he scored the first goal in a 1-1 draw.

Standard Liège
In late January 2015, he was loaned to Belgian first tier side Standard Liège for the remainder of the 2014–2015 season. He played 6 competitive games for the side, scoring once, before injuring his knee in late March 2015, effectively ending his season.

Hammarby IF
He returned to his native country on 7 February 2017, signing a two-year deal (with an option for a further) with the Stockholm-based side Hammarby IF. Hamad scored two goals in three games as Hammarby got knocked out in the group stage of the 2016–17 Svenska Cupen. On 3 April, the first match day of Allsvenskan 2017, he contributed with an assist to Rômulo's 2–1-goal in an away loss against IFK Norrköping. He scored a brace for his side in a 2-1 away win against Halmstad on 14 May. Hamad scored his first home goal at Tele2 Arena on 13 August 2017, from the penalty spot in a 2–2 draw against Östersund.

International career
Sweden U21
Hamad was a member and also for some time the captain of the Sweden U21 national side. On 7 September 2010, Hamad scored a last-minute goal for the 1–0 away win against Bulgaria U21 in a 2011 UEFA Euro U-21 Championship qualifier. In early 2011, Hamad revealed that he had rejected an offer from Azerbaijan coach Berti Vogts to play for his country of birth.

Sweden
Hamad was first with the Sweden squad for the 2011 January training tour and played his first cap for Sweden during this tour. His first cap for Sweden was against Botswana on 19 January 2011. Hamad was once again selected for the annual training camp for the Sweden national team in January 2012. The squad selection for the camp traditionally features the best Swedish players in domestic and other Scandinavian leagues. He was selected for the friendly against England on 14 November, but did not get any playing time, and was then again selected for the winter tour in 2013.

After a five year absence, Hamad was called up to the Swedish squad for the training tour in January 2018. He made his return on the pitch in a 1–1 draw against Estonia, where several pundits praised Hamad's performance and voted him as the best player on the pitch.