Brock Edward Lesnar (born July 12, 1977) is an American professional wrestler and former mixed martial artist and professional football player. He is currently signed to WWE, where he performs on the Raw brand.

After his successful amateur wrestling career at Bismarck State College and the University of Minnesota, Lesnar signed with WWE (then the World Wrestling Federation) in 2000. He was assigned to its developmental promotion Ohio Valley Wrestling (OVW), where he was a three-time OVW Southern Tag Team Champion with Shelton Benjamin. After debuting on WWE's main roster in 2002, Lesnar won the WWE Championship five months after his debut at the age of 25, becoming the youngest champion in the title's history. Following his match with Goldberg at WrestleMania XX, Lesnar left WWE and pursued a career in the National Football League (NFL). He was named a defensive tackle for the Minnesota Vikings, but was cut prior to the start of the 2004 season. In 2005, Lesnar returned to professional wrestling and signed with New Japan Pro-Wrestling (NJPW), where he won the IWGP Heavyweight Championship in his first match. After a contractual dispute with NJPW, he also wrestled as IWGP Heavyweight Champion in the Inoki Genome Federation (IGF).

In 2006, Lesnar pursued a career in mixed martial arts (MMA), as he signed with Hero's and won his first fight, against Min-Soo Kim, in June 2007. He then signed with the Ultimate Fighting Championship (UFC) the following October. Lesnar lost in his UFC debut against Frank Mir and then won his second fight against Heath Herring. In November 2008, Lesnar defeated Randy Couture to become the UFC Heavyweight Champion. Shortly after a successful title defense in a rematch with Mir, Lesnar was sidelined due to diverticulitis. He would return at UFC 116 to defeat Interim UFC Heavyweight Champion Shane Carwin and unify the heavyweight championships, becoming the undisputed UFC Heavyweight Champion in the process. Lesnar then lost the championship to Cain Velasquez at UFC 121. In 2011, he was once again sidelined due to diverticulitis and underwent surgery. Lesnar returned at UFC 141 in December, losing to Alistair Overeem and promptly retiring from MMA. Lesnar was a box office sensation in UFC, as he took part in some of the bestselling pay-per-view events in UFC history, including UFC 100 and UFC 116.

In April 2012, Lesnar returned to professional wrestling, rejoining WWE after an eight-year hiatus. Two years later, at WrestleMania XXX, Lesnar defeated The Undertaker to end his undefeated streak at WrestleMania. He achieved world champion status five times after this, having won the WWE World Heavyweight/WWE Championship in 2014 and 2019 as well as the WWE Universal Championship in 2017, 2018, and 2019. His first reign as Universal Champion was the longest world title reign in WWE since 1988 at 504 days (though recognized as 503 days by WWE), the sixth-longest world championship reign in the promotion's history. In June 2016, at UFC 199, the UFC advertised Lesnar's return to fight at UFC 200 even though he was still contracted with WWE. Lesnar defeated his opponent Mark Hunt via unanimous decision. However, after Lesnar was tested positive for clomiphene, a banned substance on the UFC's anti-doping policy, he was suspended from the UFC by the Nevada State Athletic Commission for one year and fined $250,000, and his victory over Hunt was overturned to a no-contest. Lesnar then retired from MMA for a second time in 2017.

Lesnar is the only person in history to hold a UFC championship and WWE world championship. Lesnar is an eight-time world champion in WWE, a one-time world champion in NJPW and IGF, a one-time heavyweight champion in the UFC, and a one-time heavyweight wrestling champion in the NCAA, the only person in history to win a championship in each of those organizations. In addition, Lesnar has won the 2002 King of the Ring tournament, the 2003 Royal Rumble, and the 2019 Money in the Bank, the third wrestler (after Edge and Sheamus) to achieve those three accomplishments. He has headlined numerous pay-per-view events for both WWE and the UFC, including WrestleMania XIX, WrestleMania 31, WrestleMania 34, WrestleMania 36, UFC 100, and UFC 116. Lesnar has been managed by Paul Heyman throughout the majority of his professional wrestling career. A 2015 ESPN.com article referred to Lesnar as "the most accomplished athlete in professional wrestling history", and fellow WWE wrestler John Cena has called Lesnar "the best in-ring performer of all time". 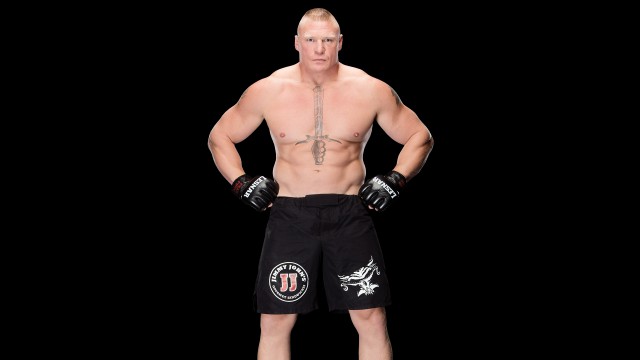