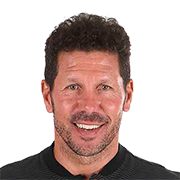 Diego Pablo Simeone González (born 28 April 1970), nicknamed El Cholo, is an Argentine professional football manager and former player who played as a midfielder; he has been the manager of Atlético Madrid since December 2011. Simeone is considered a legendary figure in the history of Atlético Madrid due to his achievements as a player and manager with them.

In his club career that started in 1987, Simeone played in Argentina, Italy, and Spain for Vélez Sarsfield, Pisa, Sevilla, Atlético Madrid, Inter Milan, Lazio, and Racing Club. He won a domestic double with Atlético Madrid in 1996, and the UEFA Cup with Inter in 1998, also winning another domestic double with Lazio in 2000, as well as the 1999 UEFA Super Cup and the 2000 Supercoppa Italiana. Simeone was capped over 100 times for the Argentina national team and represented the country at the 1994, 1998, and 2002 FIFA World Cups, and in four editions of the Copa América, winning the tournament in 1991 and 1993. He also won the King Fahd Cup in 1992 and a silver medal at the 1996 Summer Olympic games.