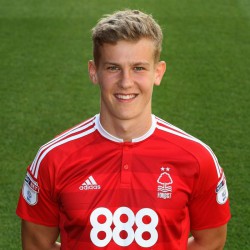 Ryan James Yates (born 21 November 1997) is an English professional footballer who plays for Nottingham Forest as a midfielder.

Club career
Yates was named as part of the Nottingham Forest first-team squad at the start of the 2016–17 season, before heading north to National League side Barrow for an initial period of one-month on 26 August 2016. On 21 September Barrow opted to extend the loan deal, and again on 2 November until 9 January 2017. After this final extension to the deal, Barrow manager Paul Cox said of Yates: "He's a diamond in terms of wanting to learn, wanting to get better, wanting to get stronger. That's what makes Ryan so potent in this squad. He rubs off on other people with his hunger and desire."

Yates was recalled by Forest on 13 January, having made nineteen appearances and scoring twice in all competitions for Barrow.

On 31 January, shortly after his recall from Barrow, Yates was loaned out to League One's Shrewsbury Town for the remainder of the season. He made his professional league debut on 14 February as a 64th-minute substitute of a 2–1 loss to Peterborough United. On 27 February, whilst on loan with Shrewsbury Town, Yates extended his contract at Forest until 2019. Yates was shown the first red card of his professional career on 1 April for two sliding tackles in a game at Bristol Rovers, despite having been pushed to the floor by the opponent's players after the second challenge, in a decision described by his loan club as "harsh".

On 4 August 2017 Yates joined Notts County on loan for the 2017–18 season, joining fellow Forest midfielder Jorge Grant at the club. His debut for the club came on 8 August away at Scunthorpe United in the first round of the EFL Cup. Yates started the match and scored in the last minute of the second period of extra time to equalise the score to 3–3. Although Notts lost the subsequent penalty shootout, Yates received praise from his manager Kevin Nolan, who described the teenager as a "leader" with "bags and bags of potential".

On 11 January 2018, Yates signed a deal keeping him at Nottingham Forest until 2020, and was recalled from his loan at Notts County to instead join League One club Scunthorpe United for the remainder of the 2017–18 season. He scored on his Iron début against Peterborough United, in what the Scunthorpe Telegraph described as a "man of the match performance". Sky Sports awarded Yates the man of the match trophy for the 1–1 draw with Oxford United on 30 March.